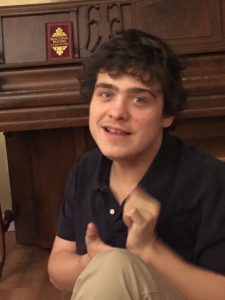 I’m learning to listen to Zack. I expect him to communicate – want him to voice his thoughts and feelings – and that means I have to listen and respond in a way that makes a difference in his life. Otherwise, why should he bother saying anything?

Something happened recently that showed me how much I need to grow in communicating and responding with respect to my now-adult son.

It’s Spring and that means time to play soccer. Our oldest son, Taylor, loved to play soccer and was a star. Zack likes to participate in other sports, but he doesn’t enjoy soccer. I can tell that he’s afraid of the ball (I was too). It seems to rain every practice, hard. And he’s usually hanging out in the bathroom when I get there to pick him up.

Still, I sign him up every Spring without asking if he wants to play or not, because I don’t want to hear his answer. I just want him to get exercise. And I think, “Maybe this year he’ll like it. Maybe he’ll actually play.”

Practice started last week and right away, on the second day, Zack’s team had a game. I drove to watch in the pouring rain. I felt sorry and a bit guilty before I’d even left our driveway as I thought about Zack sitting on the bench in the rain, no hood on the jacket he wore to school that morning, no doubt hungry. Nobody but a kid who loved the game would want to play in those conditions. 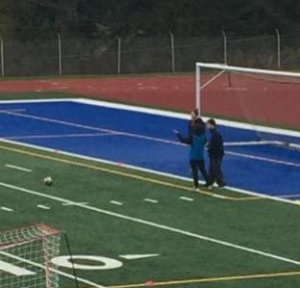 My one and only photo of Zack from soccer this year – his penalty kick!

I got there and climbed the steps of the bleachers to join the other parents just in time to see Zack being led out to the field to kick the ball in from the sidelines. The ball went at least 20 feet! I yelled, “Way to go, Zack!” and he looked up and waved. Then he walked back to the bench and sat down.

When the game was over Zack and his helper walked toward me. I mentioned the kick and she explained that Zack’s job is to do the penalty kicks. She said, “He doesn’t want to do anything else, so he just comes in for those.”

Have I said before that I love Special Olympics? This is yet another reason why. Where else can you do one thing – the thing you love in a game – and not have to do all the rest? Nowhere else. It’s perfect. Zack’s season was off to a great start.

Or so I thought. But Zack told me otherwise on the following Monday morning when I was getting his soccer clothes ready to take to school.

“No. No,” Zack said, pushing the sweatpants and t-shirt back onto the shelf I was taking them from.

“Zack, you have soccer today. You have to take these to change into,” I said.

“No. No!” he said, pushing them again and holding me from behind so I couldn’t move to reach them.

I wondered if something had happened while he was changing after school, or if he just didn’t want to play the game. But I wasn’t ready to give up, so all I did was maneuver out of his grasp and head toward the front door with him right behind me repeating “No. No!” as I took out a plastic bag to put them in.

“It’s soccer today, Zack,” I said again. His face clouded over and he began to chew his hand.

“No!” he shouted and grabbed at the bag, making it completely clear that he did not want to play soccer. But because he couldn’t say all the words, I was pushing my agenda. I refused to hear what I didn’t want him to be saying.

It dawned on me that Zack often has to get to the point of rage before I give in to his “No” – and that is totally unfair. I would be furious if anyone did that to me. Talk about feeling powerless. And yet, he probably goes through this many times a day.

As I saw his anger rise, I put the clothes down and said, “I hear you, Zack. Mom’s listening to you and you don’t have to play soccer if you don’t want to.”

After assuring him a couple of times, he calmed down and we were able to go out to the bus peacefully, without the soccer clothes.

Lesson learned, Mom? I hope so.