After stating categorically that Zack knows how to be appropriate with girls, I have to backtrack and say this hasn’t always been the case.

To begin with, his preference for pretty girls goes back further than age 15. Zack’s junior high teacher, Laura, looked like she was about 25, even though she was old enough to be his mother. Her pretty blond curls and darling figure were a magnet to him, and one day he just couldn’t resist any longer. He reached out and touched her bottom as she walked by his desk.

This brought an immediate response of “No, Zack,” a phone call home, and a series of serious conversations about where we touch people, and where we do not touch them. Zack learned that a pat on the shoulder is a good way to let someone know we like them; a pat on the bottom is not. In short, he learned that the bathing suit area is off limits. 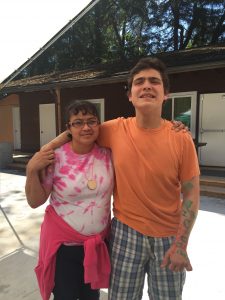 Thankfully, the lesson stuck. We still work with Zack on not putting his hand in people’s faces when he waves hello, but at least he isn’t putting his hands other places. Though taught to make sure Zack behaved well, we knew it was also important for his own protection.

Then the day came, when Zack was 17, that every mother—and especially those of us with non-verbal children—keep a wildly protective eye out for. Though I hate to think it, there was a warning sign a week prior to the actual event. It happened like this:

I picked up Zack at his after-school care and was headed home on the road that passes the high school he attended. As we approached the school he began whining and actually started to cry. Alarmed at his distress, I spoke calmly and asked if anything bad had happened at school. He didn’t have the words to tell me, but I knew that something had. We got home and I immediately emailed his teacher. She called and we talked, but she could not recall anything that could have upset my son. Worried about one of my greatest fears becoming a reality, I asked if he had gone to the bathroom with any other children that day, and she assured me that no, there had been adult supervision every time.

At that point, she mentioned that Zack’s buddy—another boy with special needs—kept trying to hug him and Zack seemed annoyed by the boy’s hovering. She said they would keep an eye out and make sure Tommy stopped doing that.

A week later, I went to the field where Zack participated in Special Olympics Track and Field with his classmates. While all the kids came from the bus area where they are dropped off, he didn’t. I waited a few minutes and then walked toward the bus lineup, only to see Zack come running toward me with his hand outstretched in a wave and his usual huge grin. We continued to the track and I worked with him to follow directions from his coach to run specific distances, throw a tennis ball, and do some stretches.

Halfway through practice, a man came up to me and introduced himself as the vice principal of Zack’s school. He asked to speak with me in private. Heart in my throat, I followed him up a small hill and sat on the grass as he told me there had been an incident a few minutes earlier.

After getting off the bus for practice, Zack and his buddy Tommy had gone to the bathroom without supervision. Apparently the same rules didn’t apply to after-school activities, or someone had dropped the ball, because I had been promised the week before that this was never allowed. Shortly after they came out of the restroom, Tommy burst into tears and confessed that when Zack was reaching over to pull up his pants, Tommy put his penis on Zack’s bottom.

“Your son knew just what to do,” the vice principal said. “Tommy said that Zack yelled, ‘No! Stop that!’ and he immediately stopped.”

On the verge of throwing up, but outwardly calm as I often am during a crisis, I thought back to those days in junior high with gratitude: Zack remembered the lesson. He knew appropriate touching from non-appropriate. And he knew what to do when someone touched him inappropriately.

Truth be told, I don’t think Zack was traumatized or suffered any consequence from the event. I think he was simply grossed out that someone would do what Tommy did. His aversion to touch was a positive in this situation, and his willingness to defend himself a strength.

If it had been a peer without a disability, I would have been out for blood. But given the fact that it was someone who probably has the mental capacity of a preschooler, how could I be angry? With Zack fine and having responded so well, I actually felt concerned for Tommy. His behavior could have led to something awful if he had touched someone who wanted to take advantage of him. He was expelled from school for three days and his parents were quite shaken.

Soon after this, I joined a committee at Zack’s school to teach sexual protection to students in special education. Though they will never be “buddies” again, we are cautiously friendly when we see Tommy at school events.

Has this alleviated my fears of Zack ever being sexually abused? Not really. I had never considered the possibility of this happening with a disabled peer. Though Zack proves himself to be a capable opponent when wrestling with his older brother, and in the incident with Tommy he shouted ‘No!’ I still pray for his protection whenever I leave him with a caregiver. I still watch him while he stands waiting for the bus in the morning and meet it every afternoon when he comes home. And I still keep my antenna on high whenever we’re out in the community. It is part of having a vulnerable child—and though he is now officially an adult, he remains vulnerable, and I remain protective. 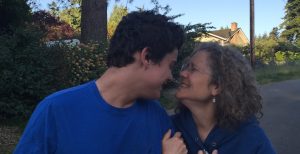 Have you experienced anything similar with your child? How do you protect him or her?