The other day, the question was, “Who cuts your hair?” Zack was supposed to answer, “barber.” But Zack didn’t know that, because Mom has always cut his hair!

It’s truly remarkable that Zack has never been injured in the process of a haircut. We used to have to do it with him on a toddler swing (the type that holds you in).

I know! How is that possible? But somehow it worked.

Every time he swung toward me, I took a snip. (Good thing he has forgiving, curly hair and really doesn’t care much what it looks like.)

Next we progressed to Zack sitting on Jay’s lap and having his head held so I could cut his hair. You can imagine there was a lot of yelling during that time. (Him, not me.)

Then we progressed to Zack sitting in a chair with headphones on, watching his shows on the iPod while I quickly snip-snip-snipped.

Now he doesn’t need the headphones and will pretty much just let me do the job, which is always quick and never too close to his ears.

What does Barber have to do with Manatee?

Back to the therapy and Zack’s “wh” question of the day. He didn’t know what to answer, so Danielle (his therapist) said, “Barber. The barber cuts your hair.”

Then she asked the question and gave the answer, expecting Zack to repeat “barber.” But whenever she said, “barber,” Zack just said, “Manatee.” This went on for some time, until she gave up for the day.

Manatee? Where did he come up with that? And what does a bulbous sea creature have to do with getting a hair cut?

Danielle asked Jay and he laughed. If you’re familiar with the popular children’s videos called “Veggie Tales,” you may have gotten the joke by now. One of them has a character in it named Barbara Manatee.

From words to actions

Coincidentally, this morning Jay said he was going to the barber, and I suggested he take Zack along. With all the progress we’ve seen lately, I thought maybe … just maybe … Zack would be willing to get his hair cut by a professional. 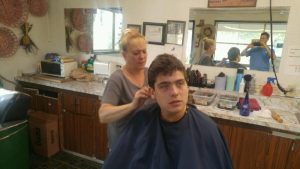 First time in the barber chair and it’s okay.

And he was! He did it! Something we thought would never happen. Zack proudly sat in the chair and didn’t make a peep as the barber worked her magic. She even used the clippers around his ears!!!!! 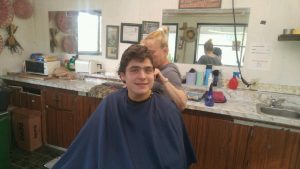 Feeling good about being so grown up!

When they got home, Zack was happy to show me his new hair cut, and obviously pleased with how he looked. I am seriously so proud of my guy right now I could bust a button. This is HUGE progress for someone with sensory issues. HUGE. And doesn’t he look handsome? 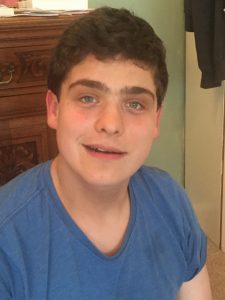 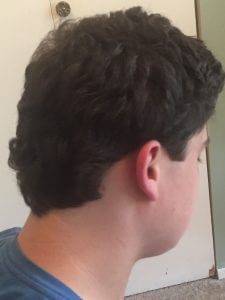 And that’s not all …

A group of friends came over to celebrate my recent birthday two nights ago. As usual, Zack said hello to everyone at the door when they arrived and intermittently came in and out of the dining room as we were eating and talking. He enjoys making appearances at parties, as long as he can go into another room for the majority of the evening. 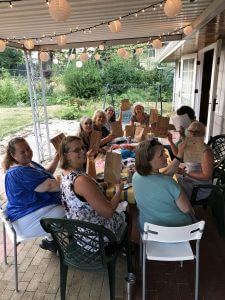 Zack’s the one with the paper over his face in this photo.

After dinner, we moved outside to label/decorate brown paper bags and then fill them with undergarments to give out to women who are homeless. (I have everything I need so I asked my friends to bring these in place of presents.)

Zack sat down with us and was tracing letters. Then, as the bags were filled, I had him staple them shut (he LOVES to use the stapler). Eventually, he was taking the bags that the women handed him and stapling them on his own. He stayed with us the entire time, and stapled 50 or more bags that night. And he even decorated a bag.

The miracle is that Zack wanted to be part of the gang. He joined in. And he kept going until we were done with the task.

I am so grateful! So very grateful for every step our boy is taking. Every one is a miracle–something we never thought would happen. Thank you, everyone, for praying and wishing us well along the journey!