Today is Zack’s first day of basketball practice for the year. There was some miscommunication with the start time for the season–or maybe I just screwed up–and I didn’t register him on time. But the coach is trying to work it out anyway. So, in honor of today, I’m posting this story I wrote nearly a year ago about Zack’s basketball tournament.

Zack usually wakes up by 6 a.m. and serves as the household alarm clock, except on days when we have someplace to go at the crack of dawn. So it didn’t surprise me that I needed to start making noise early on the day of his Special Olympics basketball tournament, when we were required to be an hour away from our house by 7:30 a.m.

Breakfast was packed and Jay was putting on Zack’s socks and lacing up his tennis shoes when I composed a war cry to start the day. In my most guttural voice, I chanted: “Basketbaaaaaaaaal athlete, Yeah!”

Our son gave no response. It was way too early for enthusiasm. But I was pumped for the tournament, so I persisted.

“Come on, Zack. You’re a Basketbaaaaaaaaal athlete, Yeah!” I repeated the phrase until he gave in and joined me. Then I whipped out my iPhone, videoed Jay and Zack showing their muscles and yelling our cheer, and sent it off to important people connected to the day—Zack’s coach and teacher Ben, and his brother Taylor (who was not really connected to the day, but is kept in the loop regardless).

With that we were off, headed to our tourney. 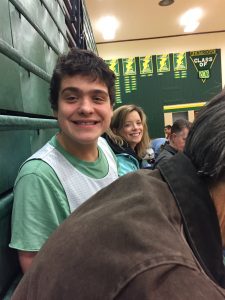 Two years ago we were surprised by our first experience of basketball with Special Olympics when we witnessed our 17-year-old son handle the overstimulation of a gym smelling of sweat, balls bouncing and people running in every direction, and loud whistles and excited shouts, without freaking out. We had expected lots of hand waving and rocking, accompanied by yelling and moans and ear covering from him, but there was little of that on this occasion. 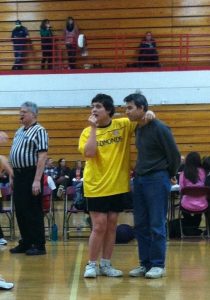 For us, that was good enough. The fact that he had actually participated in the game, learning to do throw-ins like a professional within five minutes of a private coaching session with his dad, was bonus. His purposeful allowance of my eager video-taping—well, that was over the top. We had arrived, in my opinion. Zack had come such a long way from the child we tried to get to play soccer eight years earlier—the one who ran pell-mell around the perimeter of the field, refusing to join the rest of the kids in the middle, until we finally gave up on his potential athletic career. Here we were, and he was participating! Whoo-Hooooooo! Basketbaaaaaaaaal athlete, Yeah! 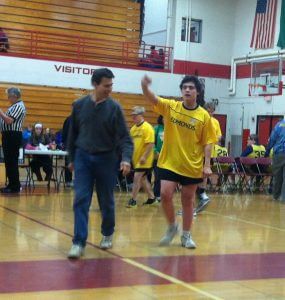 Everyone should attend at least one Special Olympics tournament in their lifetime. The sportsmanship alone restores your hope in mankind. This is where opposing teams actually cheer each other on, offering the ball again and again to the person in play, hoping for them to make a basket. It’s where time is given to jump up and down and clap in delight after each basket shot and made, and dribbling is optional on your way down the court. And, should a player fall down because they believe in their heart that they are a car and their batteries need recharging, it’s perfectly admissible for parents to come in as part of the pit crew and make that happen.

Okay, some teams are definitely more competitive than others, so I can’t generalize this behavior, but it has been our experience at Zack’s level of competition. And frankly, it’s refreshing.

Nevertheless, playing basketball requires foundational abilities before any true skill in the game can be attained. These include understanding the concept of being on a team, identifying your teammates so you throw the ball to them and not your opponents, and following a basic set of rules. Regarding this in our competition this year, it was quickly apparent the opposition had a leg-up on Zack’s team and knew how to manipulate the situation. Before long, our players would just hand the ball to them when they asked for it. 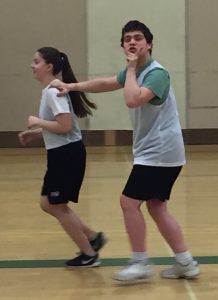 It’s also a good thing we had several neuro-typical peers (people without neurological differences that cause intellectual impairments or autism) on our team, helping to keep the game running smoothly. One student named Allison was devoted to helping Zack run in the right direction whenever he got confused by the whirling movement around him. She simply patted her shoulder and he put his hand on it and ran with her.

Sometimes I think my son is the one who has it all figured out. He knows how to stay close to a pretty girl without having to chase her. I loved the look of glee on his face as he trotted past the crowd, hand on Allison’s shoulder, holding up his finger to “shush” us, as if daring us not to tell his secret of success. 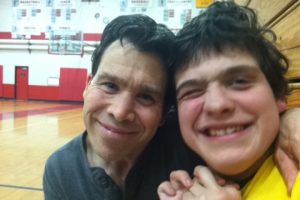