It’s Christmas Day and we’re having a quiet afternoon at our house. Jay, Zack, and me. Jay just put on the second Star Wars movie to watch, Zack is on the computer watching his shows, and I’m writing.

We went to church this morning for the first 20 minutes of our service, then walked two blocks to lead a service at an assisted living facility nearby. Two couples (Mary and Jerry, Vern and Vera) joined us in the Media Room, one of which had been waiting an hour so they wouldn’t miss it. We brought Christmas treats and ornaments for everyone.

Zack was with us when we started singing carols, but Jay took him to the library next to the Media Room after a few songs because his iPod was a bit loud. “Cliffhanger and the Banana Drop” doesn’t mix well with “Silent Night.”

After the service we came home for lunch and opened up the afternoon munchies. Our tree has lots of presents underneath, but we are waiting to open them tomorrow when Taylor and Cassidy will be with us. We figure Zack doesn’t mind. 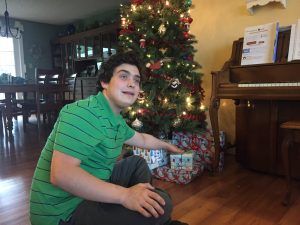 Except he saw Jay put a big “Z” on a gift last night and has wanted to open it ever since. So today, when he said “presents” we let him open that one. And since it was only a box of crackers, we let him open another one, too—a six pack of Zevia, which is pop sweetened with Stevia. That proved to be more satisfactory. 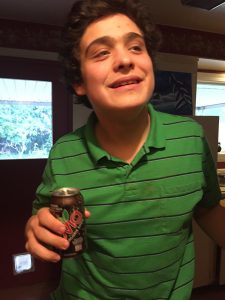 Now we are happily occupied in our own little worlds, cozy and content, with pot roast making the house smell wonderful. Friends are coming for dinner in a couple hours, and Taylor and Cassidy will be here late tonight. We’ve called our parents and given our well wishes, and life is good.

We have much to be thankful for. And we are. Jesus came, and He remains. In us. For us. Always the best gift.

But that doesn’t mean we’d ever say no to Zevia.