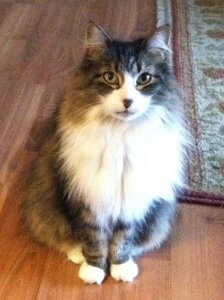 Emmy our cat is nearly 17 years old. We brought her home with her litter mate, Licorice, when they were only six weeks old. I remember the pair of them hiding in a cubbie-hole in a bookcase we had — they were small enough to both fit in the 4×4-inch space.

Sadly, Licorice disappeared after about a year. We came back from vacation and our neighbors reported seeing him until the day before we returned. I loved that cat, and have never forgotten him. He was BIG and cuddly and had a great purr.

Emmy is tiny underneath her fluffy coat, but she is also affectionate and has a ready purr. In fact, she used to go into purr overdrive when she was younger and produce this two-octave duo tone that was seriously cool. The vibration was intense.

Emmy’s seen me through a lot of tears — I used to kneel at my bedside and bury my face in her fur when I needed a good cry over my little boy who wasn’t meeting milestones. She would purr and make me feel better. It always helped.

A while after Licorice disappeared, we thought Emmy might like a playmate, so we got Zeke. This didn’t go over very well. At all. She never warmed up to him, even after he lived with us for more than five years.

Then we got Lily, our boxer-lab. That didn’t go over very well either, with Emmy. It seems she really wanted to be an only-pet-kind-of-cat. But Zeke and Lily got along swell. They were best buds and could have earned us some good prize money on America’s Funniest Home Videos if we’d ever caught them on camera.

Sadly, Zeke and Lily are both no longer with us. But Emmy remains. Our hunter-extraordinaire has many lives, or at least is very competent at staying alive. 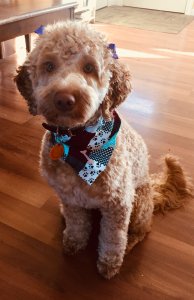 And now there is Gaby. (If you’re thinking, “poor Emmy” about now, you’re right.) This has not gone over well AT ALL. Our adorable, playful Labradoodle gets the lion’s share of our attention and affection right now, and that is not making Emmy happy at all. Worse yet, Gaby is bent on making Emmy her playmate, and you guessed it … Emmy is having nothing to do with that. But I don’t worry, because that cat is able to take care of herself. 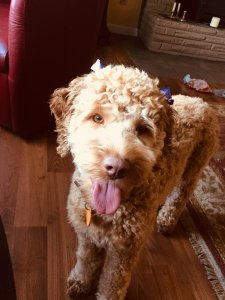 You should see the way she chases Gaby across the living room to take a swipe at her.

I used to feel badly for Gaby, and try to protect her, but she honestly will not let up! You see, there’s the sweet part of Gaby, and there’s the sassy part! And she has got enough sass to not let Emmy’s rebuffs trouble her one bit — in fact, I think she kind of likes getting a rise out of the old lady.

So how does a silky, sophisticated grandma-cat keep her cool demeanor when badgered by a fluffy, energetic, barking puppy all day long?

I hadn’t meant for it to become Emmy’s habitat, but I left it on the ledge between our kitchen and living room one day too long and she claimed ownership. It’s the perfect kitty condo from which she can observe all that goes on in our kitchen and living room, as well as who comes in and out of both doors of our house, while staying above the fray (i.e. at an elevation that Gaby cannot reach). 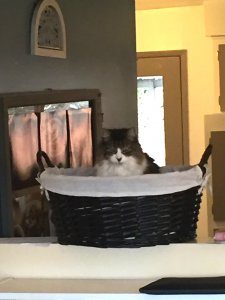 Yes, I believe she is glowering at Gaby in this photo. 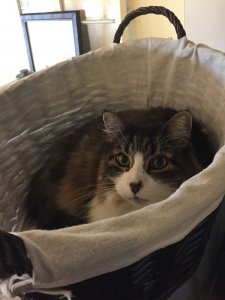 Ah … finally able to relax without being seen by that bundle of energetic fluff!