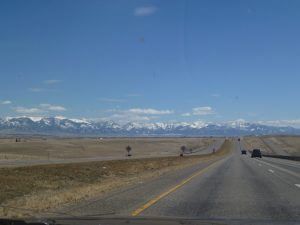 It was a JETZ (Jay, Elizabeth, Taylor and Zack) getaway like few others. We flew down the freeway in Montana, me egging Jay on to higher and higher speeds in the wide-open spaces until we clocked in at well over 100 mph to satisfy my hidden race-car driver’s need for speed.  Our journey ended at Rainbow Ranch Lodge—a posh, Montana-style resort at once rustic and European-modern, located on Gallatin River in the heart of the Rocky Mountains. 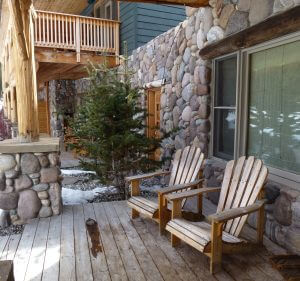 I was writing travel articles for a newspaper, so Montana Tourism arranged meals and outings for the days we were there. Used to city life, we were in awe of the enormity of the state, delighted to see bear and moose droppings near our lodge, and thrilled to eat elk and bison for dinner.

Early on our second day we went on a wagon ride into the hills. Our guide and driver, Charlie, was the quintessential Montana cowboy with hat and spurs and a friendly, talkative manner. We allowed Zack plenty of time to visit with the pair of aging draft horses, Maggie and Gus, and then the four of us climbed aboard the wagon and rode up the mountain, with me snapping a million photos and all of us breathing in the stillness and beauty. 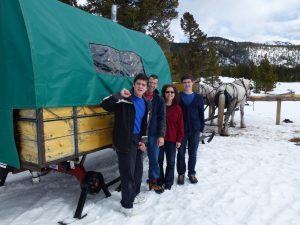 Later that day we went for dinner at a local haunt that was crowded and noisy, in sharp contrast to our morning outside. With Zack’s aversion to cramped spaces and loud music, Jay and the boys stayed outside while I put our name in at the desk and waited in the standing-room-only reception area.

I watched my family through a large window as Jay and Taylor alternately ignored and tried to intervene as Zack gyrated and squealed, his hands in front of his distorting face, overstimulated by who knows what. It may have been the cold air, the music and voices outside, or the people coming in and out of the restaurant that resulted in unintentional attention-attracting movements and vocalizations. We often don’t know the cause, just the result of the avalanche of sensory input that he pushes back against.

A teenager next to me elbowed his friend and said, “Look at that guy out there. What the …?”

The Mama Bear in me smelled danger, so I spoke loudly and quickly before he could utter another word. “That guy is my son. He has autism,” I said above the roar of the dinner crowd.

I was shaking inside, and immediately grateful that Taylor was not with me. As a teenager, he would have been humiliated by my abrupt correction of a stranger and the potential words and behavior of the boy.

Jay would understand. It was not the first time I had stopped someone beginning to make fun of our son. Truthfully, these times are very rare and I am most often surprised with the kindness of others toward Zack. Still, I am on high-alert in potentially awkward situations that could pose a threat to my boy. The thought of him being ridiculed sends me frightfully close to an emotional cliff I never want to fall off.

A few years later, after a week that included several of these adrenaline-inducing situations, I was emotionally fried and I mentioned my internal battle to Taylor when he was home on break from college.

“It’s like I want to scream at anyone who could possibly hurt Zack,” I said. “I want to smack them in the face.”

“Do you feel that way every time it happens?” he asked.

As I debated how much of the truth I should tell—that every hint of ridicule towards Zack instantly brings me to the point of rage, that I know I should be more tolerant of those who don’t understand, that I feel guilty and try hard not to hate them—Taylor continued, “Because I do.”

The confession calmed my heart immediately. He understood. Suddenly it wasn’t just Jay and me protecting Zack. Our precious and very vulnerable one has three Mama Bears—his father, his brother, and me.

This response has extended to cover all people who struggle with what the world calls disabilities, though the intensity of emotion is not the same as it is with Zack. I am proud to see compassion grow in our family as a result of our own experience, and I continue to work on my internal reaction to those who don’t seem to understand the value in every one of us. I know they need compassion as much as I do (and that’s a lot). 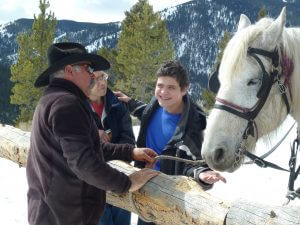