I wrote this story as a Facebook post about a recent shopping trip with Zack at Trader Joe’s (a grocery store we frequent). It was shortly after the presidential election and many of my Facebook friends were fearing an increase in discrimination. Here’s what I said, with a few updates:

As a white American whose family dates back to the pilgrims I may never have experienced discrimination if God had not given me a child who fits into one of the most marginalized groups in society–the disabled. 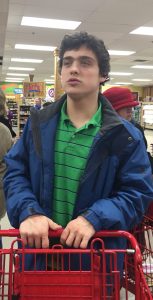 There is no hiding Zack’s disability. Within moments of encountering my son, people know there is something neurologically different about him. He chatters constantly, repeating phrases from movies, songs and books that he loves. He reacts to stimulation, such as lights and noise that most people don’t even notice, by hiding his face or using other avoidance techniques. And he tries to play peek-a-boo with complete strangers.

Jay and I often take Zack with us when we shop. He loves to go out and get a treat. To be honest, I feel pride in my heart when I am with him because I think we are teaching the world some very important lessons. But that’s not to say I don’t also walk around with a heightened sense of needing to protect him from the misconceptions and potential ill-treatment of others. Whether or not my concern is founded, nothing anyone says ever helps me fully take my guard down.

I expect this is what people who are routinely discriminated against feel. Though I don’t label this feeling in myself as fear, it probably is on a deep level; and though covered over with a cheerful demeanor, it remains, except in small groups of people who have demonstrated their trustworthiness.

That’s why an encounter at Trader Joe’s with a man named John meant so much to me that it warranted a Facebook post. I was getting my free 2-ounce coffee pick-me-up at the demonstration counter and he was behind it serving up free samples. Zack was in the chip and pop aisle (his favorite place in any store), close by but around a corner. As I walked over to check on my son, John assumed I was wondering who was making so much noise. He said, “Oh, don’t worry. He’s fine. He comes in here all the time. He’s great.”

John was assuring me that my son, Zack, was safe and belonged there before I had a chance to explain his behavior. John didn’t know Zack was with me!

I felt like bursting into tears to have someone advocate for my son in this way. Instead, I responded by saying, “He’s mine!” and John broke into a huge smile.

“He comes in here all the time with his dad,” he said. (Jay does the family grocery shopping most of the time.)

He asked our names, and I had Zack say hi to him. I wanted to continue the conversation, but Zack was asking for his second soda pop in one hour and I had to negotiate his displeasure of not getting his way. It was time to leave the store.

A couple weeks went by before I saw John again and thanked him, explaining what the encounter meant to me. He explained that he had a relative like Zack and he understood.

That day on Facebook, I wrote, “I can now put Trader Joe’s on my mental list of ‘safe’ places–at least when John is working there.

A few weeks later, Jay and I were checking out and the cashier asked my husband if he wanted to take stickers and a lollypop home for Zack. She recognized him and remembered that Zack likes red lollypops, even suggesting we take two since they were different flavors. And today, while shopping with Zack at Trader Joe’s, I swear I heard another employee call him by name. I guess John isn’t the only person who makes Trader Joe’s a safe place for Zack.

I have a feeling it won’t be long before they are giving him free pop and chips. He has that effect on people. 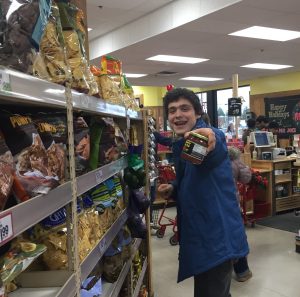 What places feel safe for you and your child in your community?