This summer would be Zack’s third year at Camp Burton, if he were going. Instead, he is doing ABA therapy five days a week, three hours a day. We could have skipped a week of that, but his Medicaid funding ends mid-September and we don’t want to miss a moment. So, camp will have to wait until next summer.

In the meantime, happy camping to all those who are attending, and here’s what I wrote about last year: 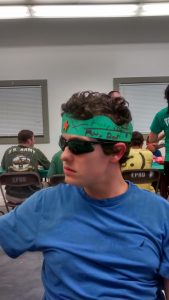 Is this cool dude my son?

The summer of 2015 was a milestone enthusiastically passed as Zack went to overnight camp for the first time. At the end of the week he came home standing taller, with a new independence and confidence. There was no question he would be going back.

I thought it would be easy to say goodbye this time around. Then primordial mama worries crept in: Will he be safe? Will he know we’re coming back? Will the counselors watch closely so he’s not taken advantage of by other campers?

A few days before camp, I asked Zack if he wanted to go. His immediate response was a hearty “Yes!” and I felt my shoulders drop a notch or two in relief. I packed two bags to be sure he had enough changes of clothing and bedding, and he was good to go. 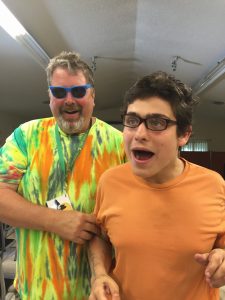 Life is always good for Zack when we ride the ferry, so the trip to camp on Vashon Island was grand. After driving to the other end of the island, we arrived and all seemed familiar—Zack’s previous counselor, Gunnar (a teacher of 30+ years), was there, and he was assigned to the same cabin and bed as last year. We unloaded his gear, put his bed together, and took out his favorite books.

Then we headed to registration. While I waited in line, Jay and Zack went to get cookies and water. Three young teenage boys came up behind me, flipping through photos on their iPhones and comparing stories about which girls they liked and which liked them. I wondered what they were doing at camp. They didn’t seem to have any special needs, except perhaps a bit of hyper-activity. Dressed smartly, one boy kept referring to things as stupid. My internal alarm went off. I debated addressing the issue head-on by telling him, “We don’t talk that way at camp.”

I know. I know! Not my place—probably—since I wasn’t working at the camp. But correcting has become my gut reaction since #1 working as a teacher, #2 becoming a mom, and #3 becoming a mom of a son with special needs.

It comes down to this: I don’t want my son hearing that word. I don’t want “stupid” to become part of Zack’s world. In fact, I don’t want anyone to refer to anything remotely close to him with negative words. And I was afraid that would happen; afraid I couldn’t trust these boys to be kind.

Bullying where I least expected it

This was at the front of my mind because during the last month of school a boy who we have known since Zack and he were in preschool together—a boy who is higher functioning than my son, who has more command of the English language—had begun goading Zack with the repeated phrase “Stop It!” You may remember that Zack often repeats this phrase, so it was completely a Mama-Radar thing that I even noticed it was becoming especially prevalent. When I did notice, I asked the teacher about it and learned that Zack’s classmate was repeating the phrase to Zack until he began saying it, at which point the instigator would laugh his head off.

Zack’s teacher apologized, saying he had not realized this had come home with Zack and assuring me that they were dealing with it at school through “social stories” with the boy. His parents were aware and working on it at home as well.

Though it didn’t seem to distress Zack, it dawned on me that this was a form of bullying. From a peer. Not where I expected it. And I hadn’t been told. Alarms were going off inside my brain—and that, possibly, is why I had such a knee-jerk reaction to the boys in line at camp.

I work hard to trust and not fear. To be brave when my son is so vulnerable—so very vulnerable that it breaks my heart to think of him being hurt in any way, shape or form.

I restrained myself and said nothing. We registered, handed over Zack’s medication for the week, and met up with another counselor who would be in Zack’s cabin all week. Then it was time for Jay and me to leave. 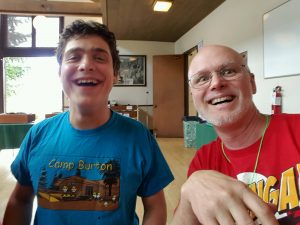 Zack and one of his favorite counselors

He nodded, turned to his counselor, and said, “Bye.”

My heart sunk. “No bud, Dad and I are saying goodbye. You’re staying here, at camp.”

The counselor preempted Zack’s rising protest with a cheerful, “Come on, Zack. Let’s go play a game!” and an arm around his shoulders. He led our easily-redirected, generally-agreeable ManBoy away as Jay and I hightailed it to the car and drove out of the parking lot, blind with tears. I turned my concerns into prayer, letting go, choosing to trust, choosing freedom over fear.

A brother’s take on it

The next morning, in the kitchen preparing breakfast with my compassionate and wise #1 son Taylor, I began to tell him about dropping Zack off and once again found myself out on that ledge of fear. Taylor was just the person to talk me off. After hearing me out, he responded:

“So, first of all, Mom, we know that Zack has super-human strength and that he uses it whenever he feels uncomfortable. Even if I try to tickle him, if he doesn’t like it, he can push me across the room. So I don’t think you need to worry about anyone ever touching him physically. And secondly, they’ve had this camp for decades and they are all really experienced. I’m sure they know what to look for, and I’m sure they keep an eagle eye out for anything close to bullying. I’m sure Zack is safe.”

He sounded logical. I had to admit that. I felt myself relax a bit. The week went by and the silence of Zack’s absence was life-giving. I didn’t hear one song from Theodore the Tugboat or Mary Poppins or Beauty and the Beast. I didn’t read one word of Cat in the Hat or Green Eggs and Ham or Owl Babies. I didn’t play the game “Where’s Zack?” once. I went out with friends without needing to arrange ManBoy care. I was spontaneous. I stayed up too late and slept in way past Zack’s usual 6:30 am wake up call. The days passed quickly, and then it was time to go and pick up our guy.

A Star is Born 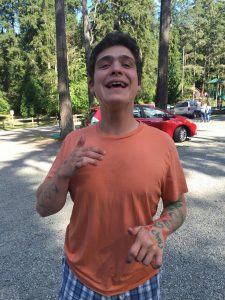 The twinges of guilt I felt at not missing Zack were put to rest as my excitement grew to be reunited. Jay and I made the trek and drove into camp, looking for him. As we walked from our car to the recreation hall he emerged from the building. I waved both hands over my head, but he didn’t see us. When he finally did, he came running and waving, his face telling me I am the most important person in his universe.

His arms were covered with orange and green markers, making him look tatted up. Zack often wants me to write on his hands with markers—Jay will, but I refuse. Not even a squiggle. There are some lines I just cannot cross, and this feels like a moral issue for me despite any attempts at logic. But a new girl at camp and he became fast friends and, in-between playing chase during the annual dance, she gladly covered his arms with loving messages. 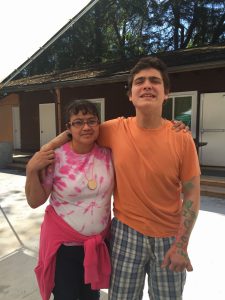 Zack and his new friend

His clothes, at 10 o’clock in the morning, looked like they had been worn for several days. Later I unpacked a suitcase of clean clothes after learning from his counselor that Zack changed only two or three times during the week.

I judged the counselors for not being attentive enough. I debated letting the director know. Then a male Facebook friend responded to my post with the comment: “Who changes their clothes more than two or three times at camp? What a star!”

What a star indeed. Looking forward to next year already.