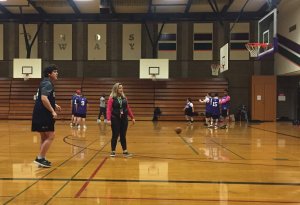 Zack with Coach Megan on the court.

Zack has been practicing basketball after school twice a week for the past month. Unfortunately, Jay and I will be out of town during his final basketball tournament, so I won’t be able to pump our son up with my cheer of “Basketball Superstar!” before his game.

OK, OK, maybe my chant is just a way of entertaining myself and I have to be careful not to annoy Zack by repeating it too many times. Regardless, I love these tournaments and am sad to miss it.

It is one of many “lasts” this year, the final year of Zack attending public school. So there was no way I was going to miss a mini-tournament last week. I enthusiastically showed up with snacks and water in hand. It’s a long time between lunch and dinner when you’re 21 years old, and you need fortification to play some ball.

Several classmates came up to visit with me while I waited for Zack to finish in the bathroom. Then I helped put his low-hanging tank top over his shirt instead of allowing bare skin to show.

Captain of the Team

Coach Megan assured me that Zack has participated much more this year than previously — he no longer sits down in the middle of the court halfway through practice, he’s got a great overhead throw, and he’s a cheerful presence on the team. In fact, he’s been named captain this year!

I asked about the captain status, and Megan said, “Well, he’s the oldest on the team, and he’s encouraging.”

Watching him walk away from his team with a sly smile as he headed across the gym to the door, I asked, “Even when he’s walking the opposite way?”

“We all walk that way sometimes,” Megan replied.

Three teams were warming up, so I settled myself against the semi-pulled-out bleachers and watched. Zack stood in line for his turn to make a basket, grinning at me occasionally and bouncing up and down happily as I took photos. The mother sitting next to me commented on how handsome he is, and I demurely said, “Oh, thank you.” Our oldest son, Taylor, would have been proud of me for not agreeing with her and adding to her compliment with my own boasting. 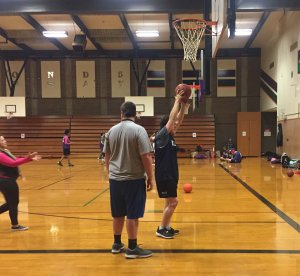 When he got to the front of the line, Zack’s coaches encouraged him to throw the ball up high toward the basket, but he characteristically held it over his head as if teasing us all. He walked slowly forward until he was directly under the basket, and Coach Megan motioned for him to throw it underhand, a technique that always proved most successful for me during junior high gym class.

Still, Zack held on to that ball. Jay and I joked that he wanted to place the ball in the hoop but couldn’t because he wasn’t quite tall enough. That humor may be lost on anyone except a parent of a child with special needs, but it made us chuckle.

Finally, Zack made a move as if he was going to throw the ball away from everyone. But at the last second, he threw it toward his coach, who caught it and immediately threw it back, giving Zack retrieval practice as well. His skills had definitely improved. 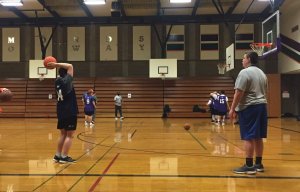 Which way is that ball gonna go?

We took a break while the visiting teams warmed up, wondering where the kids with special needs were in the mix of what looked like true high school basketball players. Then the games began.

Just about the time I began wondering why Zack wasn’t put in the game, Coach Megan let me know that she kept asking, but he kept saying, “No.” Apparently practice was enough, and he was content to sit against the wall and watch. Except for one time when he came over to say hello to me and started walking into the game of another team, he didn’t enter the court again that afternoon.

And then at 10 minutes before 5 o’clock, Zack stood in front of me, smiling. I dutifully walked him back to his team so he could play in the second game, only to learn there wasn’t going to be a second game and it was time to leave. Zack’s timing was correct, and he was ready to go home.

We walked to the car as I told him how proud I was of his throwing ability and how happy I am that he’s my son. Hands up to his chest in fists, he gave a little hop and squeal.

How great is it that someone in this world is satisfied with being a Basketball Superstar in nobody’s eyes but his mom’s?